All of them via Memeorandum, 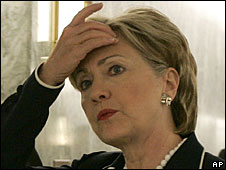 Even when the pundits and the naysayers proclaimed week after week that this race was over, you kept on voting. You’re the nurse on the second shift, the worker on the line, the waitress on her feet, the small business owner, the farmer, the teacher, the miner, the trucker, the soldier, the veteran, the student, the hardworking men and women who don’t always make the headlines, but have always written America’s story.

You have voted because you wanted to take back the White House. And because of you we won, together, the swing states necessary to get to 270 electoral votes.

And you know — In all of the states, you voted because you wanted a leader who will stand up for the deepest values of our party, a party that believes everyone should have a fair shot at the American dream, a party that cherishes every child, values every family, and counts every single vote.

She’s definitely NOT going away. That speech sounded like a victory speech to me. Jules Crittenden’s examining the situation as the night of the living dead, which pretty much sums it all.

The other side will come here in September and offer a very different set of policies and positions, and that is a debate I look forward to. It is a debate the American people deserve. But what you don’t deserve is another election that’s governed by fear, and innuendo, and division. What you won’t hear from this campaign or this party is the kind of politics that uses religion as a wedge, and patriotism as a bludgeon—that sees our opponents not as competitors to challenge, but enemies to demonize. Because we may call ourselves Democrats and Republicans, but we are Americans first. We are always Americans first.

Obama, listen to what you’re saying:
Don’t Bill Ayers and his wife Bernardine Dohrn, both former Weather Underground members, believe in governing by fear?
You are willing to meet Iran without preconditions, even when Iran has consistently said that Isreal will be anihilated. Isn’t it foolinsh of you to meet with leaders of a country whose regime is predicated on fear?
Isn’t the PLO an organization created to propagate fear and destruction?
You attended for twenty years a church that has relentlessly preaching racial and class hate from the pulpit. Isn’t that divisive?
Doesn’t the endless creation of a new class of victims foster demonization?
Why won’t you meet with General Petraeus? Is it because of his patriotism?
If you believe that using religion for political purposes creates a wedge, why the hey are your doing this:

In view of your statements, if we are “always Americans first”, why are you proposing economic policies that can place an even higher burden on the consumer?
Do you believe that equality comes with the redistribution of wealth, or with creation of opportunity?
Last but not least, how do you explain your change of mind regarding the Palestinians? 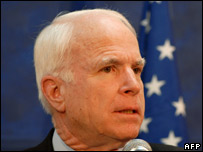 The sweeping reforms of government we need won’t occur unless we change the political habits of Washington that have locked us in an endless cycle of bickering and stalemate. Washington is consumed by a hyper-partisanship that treats every serious issue as an opportunity to trade insults; impugn each other’s motives; and fight about the next election. This is the game Washington plays. Both parties play it, as do the special interests that support each side. The American people know it’s not on the level. For all the problems we face, what frustrates them most about Washington is they don’t think we’re capable of serving the public interest before our personal ambitions; that we fight for ourselves and not for them. They are sick of the politics of selfishness, stalemate and delay, and they have every right to be. We have to change not only government policies that have failed them, but the political culture that produced them.

Of the three, Hillary and Obama both will continue to wallow in the political culture of divisiness. Only McCain has a record of being a uniter. And only McCain emphasizes cutting government spending. He’ll have my vote.