The big stories this week, all of which went mostly unnoticed:
On the same week that Chavez was supposedly telling the FARC to lay down their arms, Venezuelan journalist Patricia Poleo reported that Venezuelans of Arab ancestry are being recruited under the auspices of Tarek el Ayssami, Venezuela’s vice-Minister of the Interior, for combat training in Hezbollah camps in South Lebanon. Here is my translation. 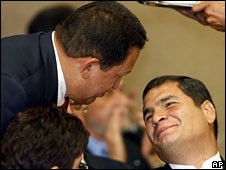 Chavez’s buddy Rafael Correa of Ecuador apparently tried to create a distraction by claiming an assasination plot. Meanwhile, Ecuador didn’t like that Interpol authenticated the FARC files, so they are trying to get the Interpol boss fired (see links under ECUADOR below).

Spain extradited to the USA a Syrian-born arms dealer who had been supplying the FARC with weapons. He was a long-time resident of Spain and was caught by a DEA sting operation. Prairie Pundit has the details.

LATIN AMERICA
Syrian in FARC sting extradited to the US

Oil prices: Who are the culprits?

ARGENTINA
In Argentina, Che Guevara Finally Gets More Than a Lousy T-Shirt: Rebel’s Birthplace Unveils a Statue of Him As It Reconsiders His Complex Legacy

RISING inflation is causing headaches for central bankers across the world. But it seems that Argentina’s monetary policymakers will be spared such concerns, thanks to the country’s updated consumer price index, which came into force on June 10th. According to the new methodology, every time a product’s price rises too sharply, it will simply be removed from the index on the ground that consumers will be deterred by the expense and switch to other goods. It came as little surprise, therefore, when the government announced the official inflation figure for May to be a mere 0.6%, while virtually all independent estimates topped 1%

CUBA
High-speed escape: The number of Cubans trying to smuggle their way into America is the highest it has been for more than a decade. Babalu has a prominent example: If at first you don’t succeed…

It’s said that the U.N. is only as good as its members. But putting a Nicaraguan dinosaur communist at the presidency of the General Assembly takes it all a step lower. Already, the America-bashing is back.

The curious behavior of Hugo Chavez

FARC loses a booster Who needs FARC when you have Hezbollah???

Pedernales, or the limits of a revolution

PDVSA lags behind in payments to contractors

The powder keg that is Venezuela