Welcome to the Carnival of Latin America and the Caribbean. If you would like your posts included in the Carnival, please email me: faustaw2 “at” gmail “dot” com.

Today’s big story: Chavez is making headlines by telling the FARC – as the BBC puts it – “to end their four-decade struggle and release all their hostages”. CNN has more on the news (h/t Siggy). 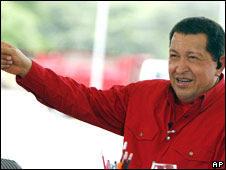 What this means is that Chavez is under very great pressure both internally and from abroad. Just yesterday Simon Romero (who’s been doing excellent reporting for the New York Times) was pointing out that in the past week Chavez has been suffering military and policy setbacks to the point where he’s had to back down from the internal espionage law that would have required all Venezuelan justice officials, including judges, to actively collaborate with the intelligence services to assist Chavista agencies, secret police or community activist groups.

Yes, he’s had to back down from the internal espionage law just a few days after pushing it through: Chavez decided on Saturday to suspend the law he enacted on Tuesday that would have turned Venezuela into a nation of informers, Cuba style. As Daniel of Venezuela News and Views puts it, When “Ooooops” might not be enough, and Miguel of The Devil Excrement explains, As Chavez turns around, everything these days seem to be an error by the revolution…

Hugo had some explaining to do after Colombia caught a Venezuelan national guard officer carrying 40,000 AK-47 assault rifle cartridges believed to be intended for the FARC. Not having a real explanation, he’s now making a big show of calling the FARC to give up their struggle.

The US Congress can add to the pressure by doing two things: enacting the Colombia Free Trade Agreement, and authorizing oil drilling in federal lands and offshore.

HACER has a weekly roundup of articles in Spanish and English on Latin America.

ARGENTINA
Argentina Flees to the Dollar

Fernandez hits at media as popularity falls – by Jude Webber

In Argentine Drug Courts, A Shocker at Sentencing

BRAZIL
Welcome to our shrinking jungle

China, Venezuela and now Brazil soon to be drilling off the coast of Florida while America sits on its own natural resources

A Hostage to Fame

Excerpts: The FARC’s Correspondence On the Captive Ingrid Betancourt

CUBA
Human Rights Advocacy and the Role of the Media

Via Prairie Pundit, The McCain Doctrine for Mexico?

NICARAGUA
The ironies of life: while the Economist was writing about Inglorious: Daniel Ortega’s lackluster return, Ortega was missing for a few days to the point that daily La Prensa was writing about Gobierno a control remoto (governing by remote control).

PERU
The other Alan Garcia

VENEZUELA
This LA Times op-ed piece blames the internal espionage law (which Chavez himself had to end in less than 5 days) on the USA: Hugo Chavez, rightly paranoid?
He may be turning Venezuela into a state of snitches, but his fears have been fueled by U.S. gaffes. More more lucid background on the law from The Economist, A police state? A draconian charter for spies where they don’t blame the US:

The suspicion must be that this law is designed to defend a declining regime rather than to bolster the security of Venezuelans.

On the Delayed Consequences of Wreck Ball Hugo: The High Cost per Barrel of Appeasing Autocracy

Life in Venezuela for the people and our MSM

This article has information on the Chavez family corruption: Chavez revolution at risk

Chavez has not only sent the FARC $300 million, and last week’s ammo, but also a delivery of Chinese-made uniforms, as Bayly points out:

Special thanks to Siggy, Maria, Larwyn, Maggie and Eneas