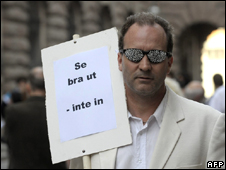 Expat recently wrote asking that I post on Sweden’s new wiretapping law, which Fjordman calls The Greatest Betrayal in History.

I wasn’t able to post on it earlier, but Porretto has an excellent essay on Freedom under siege

At this time, every government on Earth claims the power to do as it pleases to anyone and anything within its sway, for any reason or none. Governments, including the 88,000 governments that operate within these United States, compel, forbid, and expropriate without regard for any assertion of rights; that’s what “compelling government interest” means. Nowhere that a government claims jurisdiction are men truly free. But were you to ask a hundred recent high school graduates whether Americans are free, ninety-five or more would answer in the affirmative. Ask them why, and they would reply, “Because we get to vote!”

So much for the understanding of freedom.