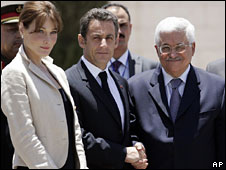 After meeting with Palestinian and Israeli leaders in his trip to Israel, a soldier shot himself dead during Sarkozy’s airport departure ceremony on Tuesday.

Another video, at the BBC.

The policeman’s family refutes claims that he killed himself

Police said that Mr Ghanan, 32, was from the northern Israeli town of Beit Dajan and was a member of the Druze community, a minority group whose religion includes an eclectic mix of beliefs rooted initially in Islam.

Naif Ghanan, Raed’s brother, said that police who informed the family of the death told them that the circumstances of the incident were still being investigated. “It is unthinkable that my brother took his own life. We believe this was an accident ‘ or even an incident in which my brother was accidentally shot by one of the security officials in the area,” he said.

The family said that it had hired a lawyer to ensure there was a “complete and detailed” investigation and to gain access to security video footage from the airport.

I’ll be following this story.