The article features prominently a photo of a Chinese soldier, and take a look at the caption: 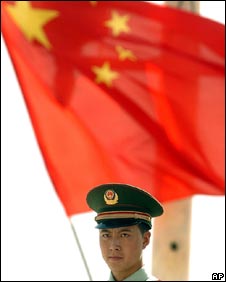 Elections in China, Pakistan and the US could prompt more arrests

If you take the time to read the actual WIA report you will find that Egypt, China and Iran accounted for more than half of all arrests. This color chart (pdf file) shows two arrests in the US for “other”, which the report doesn’t clarify at all.(*)

But hey, there’s going to be an election here in the USA, so the study, and the Beeb, have no problem jumping to conclussions, all the while assuming a pattern similar to Egypt’s, where you get to do 4 years of hell for insulting Islam:

Countries are enforcing greater Internet regulation, which will only increase with the elections in China, Pakistan, Iran and the United States this year. Assuming a pattern similar to Egypt’s occurs, the number of political blogger arrests has nowhere to go but up. With already four incidents in January and February, we expect the number of arrests in 2008 will exceed that of 2007.

Yes, folks, you read it here: an American election is regarded in the same category as elections in corrupt and/or authoritarian China, Pakistan and Iran, and is therefore cause to believe that bloggers will be arrested in the same pattern as in Egypt.

Jumping to conclusions in leaps and bounds, for sure.

The first blogger arrested in America was Daniel Aljughaifi, “for terrorism”. Yep. As in training with Al Qaeda. I’m pretty cool with his getting arrested.

Second? Jack McClellan. They give the reason for that as “For posting pictures of little girls, being a pedophile”. Great! Enjoy prison!

Not exactly what one would call a pattern similar to Egypt’s, isn’t it?