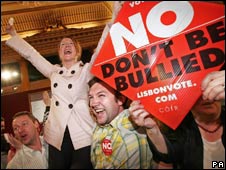 Voters in Ireland have rejected the European Union’s Lisbon reform treaty in a referendum by 53.4% to 46.6%.

The vote is a major blow to leaders in the 27-nation EU, which requires all its members to ratify the treaty. Only Ireland has held a public vote.

The Baron has the graphic:

…there is no way that the “colleagues” can get round this. Spin they might, but the fact is that, in the ONLY referendum on the treaty, the voters said Nooooooooooooooooooooooo!

EU Referendum has more, much more.