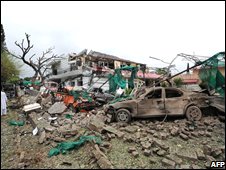 The NYT today, Embassy Attack in Pakistan Kills 4, and the article mentions,

The bomb was the second effort to target foreigners in Islamabad in the last few months and came as the civilian government has signed a series of peace deals with Islamic militants in the nation’s tribal areas.

Then there is the old Mohammed cartoons excuse: Bloomberg

Denmark’s three biggest newspapers, and about a dozen regional ones, on Feb. 13 reprinted an image of the Prophet Muhammad by cartoonist Kurt Westergaard, after police said he was the target of a terrorist-related murder plot. The publication of cartoons has triggered widespread protests in Pakistan, where 97 percent of the population is Muslim.

Gates of Vienna points out that,

Ever since their recent ban on the wearing of headscarves in courtrooms by judges, the Danes have been expecting trouble from the world’s 4.9 octillion outraged Muslims.

Trouble finally arrived today in the form of a car bomb detonated in front of the Danish embassy in Pakistan. Preliminary reports indicate that no actual Danes were injured or killed in the attack. Like so many other expressions of Muslim indignation, the work of the terrorists has had the primary effect of killing and maiming other Muslims.

The Beeb has the weirdest headline: Blast by Pakistan Danish embassy. Blast by? Do they mean to imply that the Danish embassy is to blame? As you can see in their own video report, the explosion was at the embassy site.

Or can’t the Beeb get themselves to call an attack an attack?

UPDATE, Wednesday June 4
Pakistan ambassador to Denmark: ‘Are you satisfied?’

(The Carnival of Latin America will be up in an hour or two. Please bear with me.)