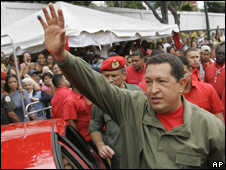 Having lost last December’s referendum – by which he wanted absolute powers – Chavez is resorting to consolidating his power through decrees, all in the name of defeating “the empire”, i.e. the United States.

President Hugo Chavez has used his decree powers to carry out a major overhaul of this country’s intelligence agencies, provoking a fierce backlash here from human rights groups and legal scholars who say the measures will force citizens to inform on one another to avoid prison terms.

The new law requires people in the country to comply with requests to assist the agencies, secret police or community activist groups loyal to Mr. Chavez. Refusal can result in prison terms of two to four years for most people and four to six years for government employees.

Hugo’s new decree is a carbon copy of what the Castro regime has used for oppressing its people for the past half century:

But the new law may also point to the influence of Cuba, Venezuela’s top ally, on intelligence policies. For instance, the use of community-monitoring groups to assist in gathering intelligence resembles Cuba’s use of neighborhood Committees for the Defense of the Revolution to report on antigovernment behavior.

One more stepping stone towards Cubazuela.

The BBC reports that

The law allows security forces to gather evidence through surveillance methods such as wiretapping without obtaining a court order, and authorities can withhold evidence from defence lawyers if it is considered to be in the interest of national security.

Of course the Chavistas hasten to reassure the naive that

On Monday, however, [Interior Minister] Mr. Rodríguez Chacín softened his tone, saying the law would not lead to political intimidation or restrict freedom of expression.

The law is so restrictive and volatile that Chavez didn’t risk pushing it through the National Assembly,

justice officials, including judges, are required to actively collaborate with the intelligence services rather than serve as a check on them.

Now that Chavez has changed the laws yet again, is a Venezuelan Soviet-style Check enforcement in the works next?

Because make no mistake: this new decree law is worse than the Patriot Act of the US. If I bring up this last remark it is because the Bush administration Patriot Act is perhaps its most controversial legal action, the one that has damaged the most its popularity over the years. Not for me to discuss the virtues and sins of the Patriot Act here: I want to limit myself to note that the Patriot Act was lengthily discussed, had to be voted and exists in a country where considerable safeguards exists. Not to mention that September 11 did take place and that the US is truly under constant terrorist threat. Maybe there were better ways to enhance US security but the Patriot Act is still under the constant monitoring of an independent judicial system and a strong press, thus many abuses have been corrected.

None of this would hold true for Venezuela as the new decree law goes into practice.

In other Hugo news, Hugo Chavez Goes After the Jews Again

And at IBD,
Internal Spying Begins In Venezuela

Intelligence organs will now be split into four groups, to ensure that they operate in a snitching climate of internal fear, unable to unite against him. His interior minister, Ramon Rodriguez Chacin, who on TV last December told FARC terrorists “we are with you,” is as thuggish as he appears. He even bears a physical resemblance to Lavrenty Beria, Josef Stalin’s feared secret police chief.