“A lot of people don’t know … that McCain made a propaganda video for the enemy while he was in captivity,” wrote Americablog.com’s John Aravosis. “Putting that bit of disloyalty aside, what exactly is McCain’s military experience that prepares him for being commander in chief?”

“Getting shot down, tortured and then doing propaganda for the enemy is not command experience,” Aravosis wrote in the blog post, titled “Honestly, besides being tortured, what did McCain do to excel in the military?”

HONESTLY, IS JOHN ARAVOSIS A PIECE OF EXCREMENT OR WHAT?

But take a look at what Wesley Clark has to say:

Is this the “change” that everyone wants in Washington?

I just got back in town after spending a delightful week in Florida with family and friends, hence, the abridged Carnival.

If you would like your posts included in next week’s Carnival, please email me: faustaw2 “at” gmail “dot” com.

BOLIVIA
Bolivia’s Annual “Punch Your Neighbor In the Face” Festival

Biofuels in Brazil: Lean, green and not mean

CUBA
Anyone for cocktails? Outsiders bet that bigger changes are on their way

NICARAGUA
Why Iran is building a $200 million dam in Nicaragua

Nicaragua: The Inherent Dangers of Being a Militant Mecca

Nicas take to the streets to protest Ortega and the Pacto

Immigration
Phoenix man killed at home by three Mexican militiamen in military gear, or maybe not

School Puts Mexican-Americans on the Road to Success

Special thanks to Eneas, Larwyn, Maggie, Maria, and Siggy 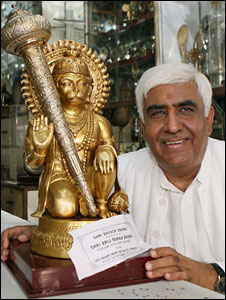 In addition to the cult of Obama, Obama himself has been carrying a charm of the Hindu god Hanuman, so Hanuman devotees will be sending him a statue of the revered Indian monkey God, Hanuman:

The group decided to order the idol after they read a magazine report saying that Mr Obama carried a good luck ‘monkey king’ charm.

Seems that the Indians are hoping for change, and a miracle or two,

“Obama stands for change. We are hoping that he will bring about change so that oil and food prices come down,” he said.

The Times of India reports that

Obama’s representative Carolyn Sauvage-Mar on Tuesday received a gold-plated two-feet-high idol which she will pass it on to the Obama after it is sanctified.

The idol is being presented to Obama as he is reported to be a Lord Hanuman devotee and carries with him a locket of the monkey god along with other good luck charms.

The idol will be kept at the temple for 11 more days (starting from June 24, the date of the news item) and then sent to US, which means the idol is due to arrive on July 4.

I wonder what the Jewish, Christian, and Muslim communities in the USA will have to say about this Obaman fondness for “good luck charms”…

… says The Manolo, who found it at Times on Line:

According to Vatican sources the Pope’s shoes are made by a cobbler from Novara called Adriano Stefanelli, who makes them from calf or kid for the winter and nappa leather for the summer. Papal shoe repairs are carried out by Antonio Arellano, a Peruvian shoemaker in the Borgo, the medieval quarter next to St Peter’s. The article, on “Ratzinger’s Liturgical Vestments”, was written by Juan Manuel de Prada, the noted Spanish writer and author of The Tempest, who is not related to the fashion company. De Prada said that the image of the German-born Pope as concerned with “frivolity” was at odds with the truth, which was that he was a “simple and sober” man. Suggestions to the contrary were “stupid and banal”.

And here I thought Shakespeare wrote The Tempest.

In one of life’s coincidences, Novara is the town I was referring to when I wrote this post four years ago.

Last night we had the pleasure of having dinner with charming and hansome Steve Graham of Hog on Ice, author of the funniest and most delicious cookbook ever to hit the stands. Steve brought his delicious brownies, and my whole family loves them.

You’ve GOT to try his cheesecake: just take a look at the picture. Steve says,

You might think Enderlin’s professional standing would have been damaged by all this. You would be wrong. In less than a week, a petition was whipped up by his friends at Le Nouvel Observateur, France’s premier left-wing newsweekly. The petition conceded no gray areas, no hint of doubt. It called Karsenty’s vehemently argued but exhaustively documented stance a “seven-year hate-filled smear campaign” aimed at destroying Enderlin’s “professional dignity.” It flatly stated in the opening paragraph that Muhammad al-Dura was killed “by shots coming from the Israeli position.” It expressed rank astonishment at a legal ruling “granting equal credibility to a journalist renowned for his rigorous work, and to willful deniers ignorant of the local realities and with no journalistic experience.” It professed concern about a jurisprudence that would-shock! horror!-allow “anyone, in the name of good faith and of a supposed right to criticize and so-called freedom of speech, to smear with impunity the honor and the reputation of news professionals.”

Read about the aftermath of the verdict.

Based on film footage provided by a Palestinian cameraman, Enderlin’s report has become infamous among students of Arab propaganda both for its destructive effects and for its probable falsity. The al-Dura affair now bids to join the Dreyfus affair in the French hall of shame.

Daniel Ortega and his Sandinista National Liberation Front (FSLN) the subjects of this Stratfor report:
Nicaragua: The Inherent Dangers of Being a Militant Mecca (h/t Siggy.)

However, the fall of the Soviet Union affected more than just economics. As the political landscape shifted in the late 1980s, places that had served as havens and training bases for Marxist militants, such as South Yemen and East Germany, became less welcoming. In 1990, both of those countries ceased to exist. This left a lot of fugitive Marxist militants looking for a place to go, and many of them relocated to Managua. What resulted was an influx of Marxist militants from European groups such as the Irish Republican Army, ETA and the Red Brigades, as well as Middle Eastern militants, such as representatives of the various Palestinian Marxist-oriented groups.

Some of the fugitives who moved to Managua were educated, skilled and surprisingly entrepreneurial. A couple from the Italian Red Brigades opened a popular Italian restaurant in downtown Managua, and members of the Basque group ETA opened an automobile repair garage in Managua’s Santa Rosa neighborhood.

Just last week the Washington Post was writing about Ortega and Nicaragua’s Eroding Democracy. Daniel Ortega, like Hugo Chavez, has had himself elected to office in order to establish a dictatorship. He has named his wife co-president; he might be looking at a line of succession, considering how he went missing for several days earlier this month for reasons that were never made clear.

Things in Nicaragua are getting so bad that even Noam Chomsky is acussing Ortega of stifling dissent.

Noam Chomsky, Salman Rushdie, Bianca Jagger and other high-profile former sympathisers have joined a chorus of alarm at recent actions.

Back when he got elected

Ortega returned to power after swapping fatigues and Marxist rhetoric for white linen shirts and John Lennon peace songs. Venezuela’s president, Hugo Chávez, has pledged subsidised oil to his socialist ally but Ortega’s ratings have slumped to 21%, according to a recent poll, on the back of high inflation and enduring poverty.