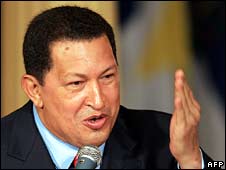 Venezuela’s associations with terror states, Iran’s meddling in Iraq and the resurgence of al Qaeda in Afghanistan top the concerns in a new State Department report on terrorism threats in countries around the world.

enezuelan President Hugo Chavez is not cooperating with U.S. anti-terror efforts and has “deepened Venezuelan relationships with state sponsors of terrorism Iran and Cuba,” the annual report says.

The report notes Chavez’s “ideological sympathy” for the Revolutionary Armed Forces of Colombia and the Colombian-based National Liberation Army, which “regularly crossed into Venezuelan territory to rest and regroup.”

It also notes that Iran and Venezuela began weekly flights between their capitals, and the passengers were not subject to proper checks. Among the passengers was a suspect in the plot to bomb New York’s John F. Kennedy International Airport.

Allow me to point out that the flights make stops in Syria, with which Chavez claimed to be “strongly united against the imperialistic aggression and hegemonic pretensions of the U.S. empire” a couple of years ago

But back to the report:

Among the many joint projects, a natural gas cartel.