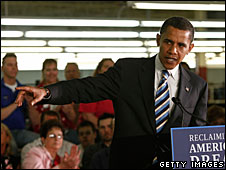 As Michael Goldfarb puts it,

Diplomacy: Obama is the only major candidate who supports tough, direct presidential diplomacy with Iran without preconditions.

At the same time, Obama advisor Susan Rice says that what matters is how you define the word “leader”.

Victor Davis Hanson gets to the heart of the matter:

If a President Obama were to enter into multiple negotiations with Iran, and if Iran were to continue to subvert the Lebanese government and threaten Israel through its surrogate Hezbollah, and continue to develop a nuclear arsenal while promising the destruction of Israel, at what point would he be willing not merely to cease talking, but to accept that his negotiations had done more harm than good and thus required a radical change of course – and would it be in time?

Listening to other things Obama’s said, The Anchoress has 34-word manifesto.

“We can’t drive our SUVs and eat as much as we want and keep our homes on 72 degrees at all times … and then just expect that other countries are going to say OK.”

To quote Bob the Builder, “Yes we can!”