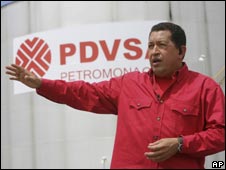 The Oil-For-Food scandal is the largest fraud ever perpetrated in the history of mankind.

Leave it to Hugo Chavez to ask for an encore:
Venezuela seeks Latin American oil-for-food fund

Venezuela called on fellow Latin American energy producing countries on Wednesday to set up a fund for food aid using windfall oil profits in an effort to give poor nations some relief from soaring prices.

President Hugo Chavez will invite regional oil and gas producers Brazil, Mexico, Ecuador and Bolivia as well as Cuba to a summit in Caracas to set up the oil-for-food fund, Venezuela’s foreign minister said.

“We will devise a formula based on the price of oil and the level of production that would allow for the creation of a special oil-for-food fund, taking into consideration the means of each country,” said Nicolas Maduro, addressing a meeting of Latin American leaders on the food crisis in Managua.

Managua has its share of poor people, but Hugo’s got global plans:

The countries hope to stave off protests and political unrest now plaguing nations from Cameroon to Bangladesh.

As if that wasn’t enough, he’s getting his hands in the banks, too:

The regional leaders gathered in Nicaragua agreed to work to get private banks in the region to direct at least 10 percent of their total lending to farmers.

Fortunately, at least when it came to that, the “Presidents and ministers from 11 countries — including Venezuela, Bolivia, Ecuador and Panama” gave the thought all the consideration that was due: they signed a non-binding agreement.

Expect Jimmy Carter to join in the effort.

UPDATE, Tuesday 20 May
Fool me once…