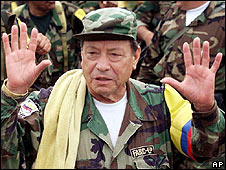 The leader of Colombia’s largest rebel group, the Farc, has died, the military has claimed in a statement.

There has been no confirmation from guerrilla sources. The top rebel commander’s death has been rumoured and disproved several times in the past.

But correspondents say the death would be a big blow to the Farc if confirmed.

The cause of death sounds like one of Ace‘s headlines: the Colombians say that three bombing raids had targeted the area where Mr Marulanda was believed to have been staying, while the FARC (unofficialy) say it was a heart attack. As Ace would put it, “Tirofijo dead of heart attack, or raid, but mostly raid”. Either way, Tirofijo‘s dead.

Chavez is not going to sleep well tonight. He’s been in bed with the FARC for a long time, and the FARC is now under siege. The Colombian government is fighting a winning battle against the FARC. The death of the head of the FARC is a huge blow to Hugo’s Communist buddies. The CNN article reminds us

Established as the military wing of the Colombian Communist Party in 1964, FARC is Colombia’s oldest, largest and best-equipped Marxist rebel group, according to the U.S. Department of State.

The Economist has a good summary of Chavez’s involvement with the FARC (regular readers of this blog know this, but here it is for review)
The FARC files: Just how much help has Hugo Chavez given to Colombia’s guerrillas?

Batches of the documents have been seen by The Economist and several other publications. They appear to show that Mr Chavez offered the FARC up to $300m, and talked of allocating the guerrillas an oil ration which they could sell for profit. They also suggest that Venezuelan army officers helped the FARC to obtain small arms, such as rocket-propelled grenades, and to set up meetings with arms dealers.

Venezuelan officials have dismissed the documents as fabrications. That was contradicted by Ronald Noble, Interpol’s secretary-general, who announced in Bogota on May 15th, after two months of study by a team of 64 foreign experts, that the computer files came from the FARC camp and had not been modified in any way. Mr Chavez called this “ridiculous”, questioning the impartiality of Mr Noble, who is American, and labelling him a “gringo policeman”. However, in one indication of their accuracy, the documents provided information that in March guided police in Costa Rica to a house where they found $480,000 in cash, as an e-mail suggested.
…
The captured documents seem to confirm that FARC commanders have co-ordinated closely with Venezuelan army and intelligence officers on the border for several years, according to a Colombian official.

The documents also cast light on the FARC’s strategic thinking. Its overriding objective seems to be to obtain international recognition as a “belligerent force” and to persuade the EU to stop labelling it a terrorist group. The guerrillas are desperate to establish a “strategic alliance” with Mr Chávez. But that was still just an aspiration in early 2007, the documents suggest. “We don’t know if we enjoy their trust,” writes Jorge Briceño (alias “Mono Jojoy”), the FARC’s military leader, to other members of the secretariat.

Contacts intensified last September after Mr Uribe asked Mr Chavez to mediate with the FARC to release the guerrillas’ hostages, including Ingrid Betancourt, a politician with French and Colombian nationality. The secretariat agreed to send one of its members, Iván Márquez, to meet Mr Chávez in Caracas to talk about swapping the hostages for jailed guerrillas—but also, wrote Mr Briceño, “to lay the foundations for mutual political relations…even though this might be in the long term.”

At their meeting, Mr Chavez “approved totally and without batting an eyelid” a FARC request for $300m, Mr Márquez reported to his colleagues in a message published by Spain’s El País and Colombia’s Semana. In a long e-mail 12 days later, Mr Briceño notes that it was not clear whether the money was “a loan or for solidarity” but that the FARC should offer Mr Chavez help in return. According to a document obtained by the Wall Street Journal, Mr Chavez’s interior minister, Ramon Rodríguez Chacin, asked the FARC to train Venezuelan soldiers in guerrilla tactics for use if the United States were to invade.

In an e-mail dated February 8th, Mr Marquez and a colleague report that Mr Chavez (whom they identify with the pseudonym “Angel”) had told them that the first $50m was “available”, with another $200m over the course of the year. However, there is no corroboration as to whether any money was actually paid. Colombian officials have long said that the FARC was wealthy through drug money. So why were they so jubilant about the loan? Perhaps because army pressure against the guerrillas has disrupted their drug business. The government has evidence that some FARC fronts are short of cash and have trouble paying farmers for coca paste, says Sergio Jaramillo, the deputy defence minister.

The secretariat’s e-mail correspondence sheds light on several other matters. It confirms that Manuel Marulanda, the FARC’s veteran leader, is still alive and apparently in overall command. It also shows the FARC’s cynicism about the plight of its hostages. Mr Briceño says repeatedly that he does not expect to achieve the hostage-for-prisoners swap while Mr Uribe is in power but that the FARC will keep pushing it to create problems for the president. When Mr Chavez asked for Ms Betancourt’s release “we told him that if we did that we would be without cards,” Mr Marquez writes.

The e-mails show the extent to which the army has the FARC on the run: the secretariat members often complain of their difficulties in communicating with each other. Days after Mr Reyes was killed another member of the secretariat, Ivan Rios, was murdered by his own bodyguard. This week Mr Ríos’s deputy, Nelly Avila Moreno (aka “Karina”), surrendered. But the FARC is far from defeated. In an e-mail last August Mr Briceño notes that guerrilla landmines are undermining army morale. Their impact is “very good and we are going to increase them,” he writes.