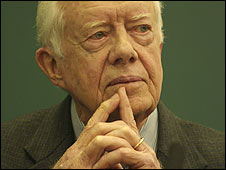 … we should be talking to the Iranians because,

“They are rational people like all of us in this room.”

At least as rational as he, considering he’s also blabbing about how Israel had 150 nuclear weapons.

The Iranians continue to withold information on their nuclear program, but Carter was too busy talking at the Hay-on-Wye literature festival to care.

Carter’s day was not complete without also telling Hillary to drop out after June 3. He’s ready for Obama to carry out Carter’s second term.