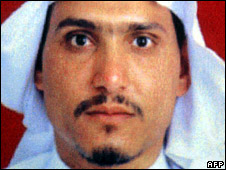 Abu Ayyub al-Masri, the nom de guerre of Abu Hamza al-Muhajir, was captured in a joint US-Iraqi operation, according to Iraqi military sources quoted by the Arabic news channel al-Arabiya.

Because of his broad involvement in al-Qaeda’s international operations, al-Masri’s capture would be a setback for al-Qaeda not only in Iraq, but to its overall organization.

However, the BBC reports that Iraq al-Qaeda chief not captured

The United States military in Iraq says a man detained in the northern city of Mosul is not in fact the leader of al-Qaeda in Iraq.