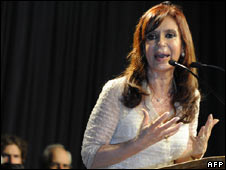 The Argentinians tend to vent their political frustration with cacerolazos, where they congregate in public places and bang on kitchen pots, usually cheap tin pots that make the most noise. They all agree on a time of day to hold the cacerolazos so anyone who wants to join in from the privacy (?) of their front yard, their farm, or their apartment in New York City will be banging at their pots at exactly the same hour.

I know Argentinians who have engaged in cacerolazos in Miami, FL, Tokio, Japan, and Montgomery, NJ. The one in Montgomery has Princeton address, so maybe I should say Princeton.

Absurd as this gesture may sound, it points to a chronic situation in Argentinian politics: the choice of Peronist populism over an open economy.

To wit, while a strong peso made Argentines prosperous in the 1990s, it was incompatible with the rigid, closed economy. The situation is the same today: Either the economy is opened, labor markets are made flexible and the business climate improves or the government clings to a weak peso policy as a way to compensate for an uncompetitive economic model and inflation comes back. Take your pick.

By choosing the latter, the Kirchners have won the support of that segment of the Argentine economy loyal to the principles of 20th-century fascist Juan Peron. These include labor militants, government bureaucrats, the Peronist political machine and the likes of Mr. D’elía, whose thugs act as Mrs. Kirchner’s informal enforcers. But by generating inflation and provoking shortages Kirchneromics is also fueling widespread discontent.

The Mr. D’Elia the article refers to is Luis D’Elia, described by the Guardian as “a controversial protest leader and former government official.” D’Elia was deputy secretary for land reform under the Nestor Kirchner administration. Last week D’Elia’s cohorts, apparently sent by the Kirchners, started beating up the hapless crowd engaging in a “cacerolazo” in front of the government palace, La Casa Rosa (the pink house).

(I use the Kirchners in plural. Presidenta Cristina Fernandez and her husband, former presidente Nestor Kirchner are a two-for-one deal, much as Hillary and Bill would be, if we elect her.)

Amateurs with tin pots are no match for professional thugs, so you know how that turned out. You would think the Kirchners would deny any association with D’Elia,

But instead of distancing herself from D’Elia’s violent behavior, Fernandez seated him behind her a night later during a speech in which she defending her higher taxes on soy exports and appealed to farmers to respect public order.

What is this particular fuss about?
Argentinian farmers have had to pay a 35% income tax on profits, and a 35% export tax. That’s bad enough. What’s making it worse is that the current administration has raised the export tax from 35% to 44%. With rising commodity prices,

if the price of soy goes up… the “retention rate” increases until the government can end up taking as much as 95% of any marginal increase in farmers’ gross income.

As Anastasia O’Grady explains in her article,

Mrs. Kirchner says the tax increase is a redistribution mechanism, suggesting that growers and ranchers have to be forced to share more of their good fortune with others. But the greater motivation behind the export-tax increase is inflation.

This government, it seems, will do just about anything to reduce inflation except the one thing that would solve the problem: Let the peso strengthen. It has imposed price controls on businesses; frozen, and then subsidized, energy prices; and prohibited the export of beef.

Allow me to point out that Argentinian beef is one of the best in the world. Prohibiting its export is a foolish measure indeed. But I digress.

Planting, harvest, transport and the cost of land eat up another 50%, therefore it’s not surprising that the farmers are protesting.

Protesting farmers have stopped trucks carrying farm produce, making them turn back or dump their goods on the side of the roads.

The farmers continue their strike, and Cristina is promising not to cut taxes, but to subsidize small and medium-sized farmers.

Price controls lead to shortages, inflation and black markets, but the Kirchners are not above fudging the numbers, either:

Last year it fired the director of the government’s agency for inflation data because she refused to fudge the numbers. Even so, prices rose by an estimated 20% in 2007 and expectations for this year remain high. This would explain the new round of confiscatory export taxes. By discouraging farmers from sending food abroad, the government thinks it can increase food supplies inside the country and damp prices.

While making farmers furious and reducing the incentive to produce, this does nothing to address the causes of the inflation, which are monetary expansion and the failure of the economy to attract investment and expand productive capacity. A strong peso and a commitment from the government to respect private property are what’s needed to confront rising prices.

That’s not about to happen any time soon. The Kirchners are willing to send in the thugs to prevent it.

Special thanks to Siggy for the links.