If you would like your posts to be included in the Carnivals, please email me faustaw2 “at” gmail “dot” com.

The Colombian government said Saturday it has fired Mark Penn’s public relations firm after the chief campaign strategist for Sen. Hillary Rodham Clinton apologized for meeting with Colombian officials pushing a trade deal with the U.S. 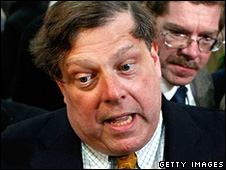 Then Penn resigned/ was pushed out of the Clinton campaign:

“Sources said that the Clintons were angry to learn about Penn’s work, especially because they had been told that Penn had recused himself from controversial clients and would restrict his private work.”

Ironically, “Penn also was regarded by many in the campaign as too self-serving.”

Spanish-language blog of the week:
El opinador compulsivo, via Judith

THE WEEK IN LATIN AMERICA
CULTURE
Julio Cortázar: the Poetics of Exile

ARGENTINA
Via Gates of Vienna, Iran: Ahmadinejad thanks football legend for his support

How Argentina screws the farmers

Argentina: Create a distraction and claim the Falklands… again

CUBA
Cuba takes a step from the shadows

Prisoner of Conscience vs. Political Prisoner

I’m sure there is nothing to it…

Portrait of Hugo while visiting Brazil.

Special thanks to Maria, Larwyn, Maggie, and Siggy for their support.