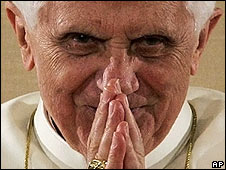 Late last evening I was discussing with a friend Pope Benedict’s speech at the UN.

She, a practicing Catholic, was ver moved by his words.

I, a lapsed Catholic, was not.

And here’s the reason why:

I firmly believe that the Declaration of Independence is a moral document because for the first time in the history of mankind a document stated,

We hold these truths to be self-evident, that all men are created equal, that they are endowed by their Creator with certain unalienable Right, that among these are Life, Liberty and the pursuit of Happiness.

At the UN, Pope Benedict’s position was that human rights derive from a “sense of justice built primarily upon solidarity”:

Experience shows that legality often prevails over justice when the insistence upon rights makes them appear as the exclusive result of legislative enactments or normative decisions taken by the various agencies of those in power. When presented purely in terms of legality, rights risk becoming weak propositions divorced from the ethical and rational dimension which is their foundation and their goal. The Universal Declaration, rather, has reinforced the conviction that respect for human rights is principally rooted in unchanging justice, on which the binding force of international proclamations is also based. This aspect is often overlooked when the attempt is made to deprive rights of their true function in the name of a narrowly utilitarian perspective. Since rights and the resulting duties follow naturally from human interaction, it is easy to forget that they are the fruit of a commonly held sense of justice built primarily upon solidarity among the members of society, and hence valid at all times and for all peoples. This intuition was expressed as early as the fifth century by Augustine of Hippo, one of the masters of our intellectual heritage. He taught that the saying: Do not do to others what you would not want done to you “cannot in any way vary according to the different understandings that have arisen in the world” (De Doctrina Christiana, III, 14). Human rights, then, must be respected as an expression of justice, and not merely because they are enforceable through the will of the legislators.

Unfortunately a “sense of justice built primarily upon solidarity” is exactly what generates the mentality where the UN Human Rights Council, and the UN World Conferences Against Racism, continue to condemn Israel and the US.