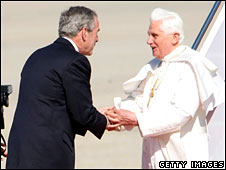 Pope Should Start “Spiritual Renewal” with Bisexual God because, according to Robert McElvaine,

If one goes by McElvaine’s article, the teachings of the Church are based on the teachings of a a few gnostic “gospels” and a Puerto Rican guy named Heh-SOOS who sells ice cream in Old San Juan, for all he cares.

I know, I know, one shouldn’t lapse into sarcasm when reading such crap. Clearly I should see a doctor for a refill of Sarcasma. And pray to Saint Jerome, patron saint of bloggers.

Fortunately for the rest of us, Professor Bainbridge takes up the challenge and gives a well reasoned response:

In order to make that claim, of course, McElvaine has to make a move that puts him outside the mainstream of historical Christianity; namely, he has to argue that the Gospels do not fairly represent the teaching of Jesus. Otherwise, he stumbles over the recorded references to Christ referring to God as “Father.” If McElvaine wants to rewrite the Bible, as Thomas jefferson did, he is free to do so. At that point, however, he ceases to be part of what can fairly be called the Christian faith. Instead, he’s off in some Gnostic heresy.

Prof. Bainbridge links to Matthew Berke‘s 1996 essay, which reminds us that

There can be little doubt that, for Judaism, divine parenthood is better symbolized by fatherhood than motherhood, or at least that fatherhood is far less problematic than motherhood. In Genesis, God – like a father – generates outside of Himself. In the creation myth of feminine deities, however, everything emerges from the womb of the Mother God, conveying a sense that the world is an emanation or extension of the divine, and therefore divinized, as in pantheism. But at the very center of Jewish monotheism is the denial of a divinized nature: Nature is good, because God has made it so, but nature is not divine, and human beings are not made of godstuff.

On a side issue, McElvaine presumes to know better, as do others who strive to diminish the importance of men in society. We all need a father, and whether McElvaine, feminist theory, or Heh-SOOS the ice cream vendor like it or not, only a man can be a father. Failing to recognize so has terrible consequences for all.

Following the HuffPo’s article, Catholics have stormed their doors and are demanding the beheading of those who insult God.

The Anchoress is doing an excellent job of covering/commenting on the Pope’s visit. Click on the photo for the BBC’s story on the Pope’s arrival.