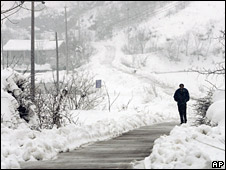 Even the Beeb noticed: Global warming ‘dips this year’

Global temperatures will drop slightly this year due to the cooling effect of the La Nina current in the Pacific, UN meteorologists have said.

The World Meteorological Organization’s secretary-general, Michel Jarraud, told the BBC it was likely that La Nina would continue into the summer.

This would mean global temperatures have not risen since 1998, prompting some to question climate change theory.

But hey, for as long as Al Gore can continue to sell his snake oil and his acolytes continue to feel good as they sit in the darkness and curse the lighting of even a single candle, we’re going to be told to BELIEVE in global warming and that the end is near.