Four Latin American leaders, meeting in Caracas, have agreed on a $100m (£50m) scheme to combat the impact of rising food prices on the region’s poor.

The presidents of Bolivia, Nicaragua and Venezuela and Cuba’s vice-president also agreed on joint programmes to promote the development of agriculture.

Chavez’s efforts at creating a command economy and setting price controls has lead to shortages of beef, poultry, sugar, milk, ground coffee, cheese and beans for over a year. Cuba’s ruined economy for decades has had its people subsisting on rations that are worse than slave rations. 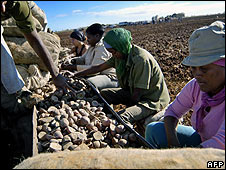 The article’s caption to this photo reads “Cuba is among several countries dependent on food imports”; The reason for that is that Communism ruined the Cuban agricultural industry. The Cuban regime can not subsist without foreign governments bankrolling it. In the olden days, it was the Soviet Union, and this meeting would have taken place in Havana. Nowadays, it’s Chavez who’s providing the funds, so the meeting took place in Caracas.

Bolivia and Nicaragua now join them on the path to ruin.