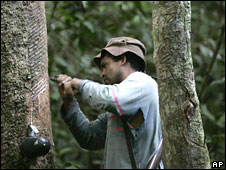 Having experienced the type of bugs one finds in the rainforest, that doesn’t sound all that sexy, but it sounds like rainforest rubbers are a good idea,

The Brazilian government has begun producing condoms using rubber from trees in the Amazon.

The health ministry says the move will help preserve the largest rainforest in the world.

It will also cut dependence on imported contraceptives, which are given away to fight Aids.
…
The new state-run factory is in the north-western state of Acre, and will initially produce 100 million condoms a year, which will be known by the name Natex.

Officials believe that not only will it generate income for Amazon residents, but it will involve using a product which is widely available and can be obtained without destroying large areas of the rainforest.

Apparently the Brazilian government’s the world’s largest buyer of condoms,

purchasing more than a billion of the contraceptives in recent years

I’ll leave it to my readers to come up with puns and jokes, but this program is one more reason why I’m so optimistic on Brazil: the country is developing local industry to meet its needs, and to export to the world.

Good for them, good for everybody.