Here’s one of the more absurd headlines that have come up during the past four days Venezuela shuts border as accusations fly. 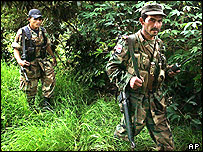 All that Venezuela claims to have done is close its borders to commercial traffic with Colombia. The border remains as porous as any border could possibly be, particularly when it comes to the FARC’s capability to move about freely.

That’s exactly the opposite of what the region needs:

Venezuela closed its borders to truck traffic, halting trade between the two nations worth more than $5 billion annually. Colombian TV broadcast images of lines of 18-wheelers sitting idle next to customs posts.

The rest of the article repeats much of what I have posted about, but the interesting part is the sidebar:

A look at the military strength of U.S.-backed Colombia compared to Ecuador and Venezuela (troop strength and reservist figures include army, navy, air force personnel):

On those 280,000 Venezuelan reservists, whose fighting capability is unknown, it’s worth revisiting this 2006 NYT article by Simon Romero:

As dawn broke in this gritty city adorned with revolutionary graffiti and murals one day recently, about 300 residents were practicing military-style marching, strutting under the hot sun and clicking their heels in a salute to their commander. This ragtag army of nurses, students and other citizens is one of many being formed throughout Venezuela, part of President Hugo Chavez’s attempt to create Latin America’s largest civilian reserve force.

Be nice to Hugo or he’ll sic grandma on you.

Tempting as it might be to Hugo to start an international incident that might bring about his much-wished-for invasion by the US, Hugo can’t do it alone, or by bringing grandma to do his fighting.

As I said on Monday, whether the military would go along Chavez’s plan and create a Falklands Islands-like diversion from Venezuela’s increasingly dire internal situation is anyone’s guess. But surely it would take more than Chavez’s rants to bring about an international incident.

UPDATE:
At IBD: Oil For Terror

Colombia’s high commissioner for peace, Luis Restrepo, reported that Marquez said Chavez would hand FARC a “stake in oil companies” to funnel $300 million in financial support. “We already have the first 50 million and he has a schedule to complete 200 during the year,” Marquez wrote. “The friend suggested working the package through the black market, to avoid problems.”

So Chavez didn’t just hand them cash in a black bag. More ingeniously, he “offered us a chance of a business in which we will receive a portion of oil to sell abroad, leaving us a juicy profit,” the terrorist gushed. “We will receive ($300 million) to create a for-profit company for investments in Venezuela. It’s likely that we will get government contracts.”

In other words, Chavez was offering the FARC seed capital to ensure that its cash continued permanently — along with its efforts to topple Colombia’s democracy. In light of its previously unknown bid to acquire 50 kilograms of enriched uranium for a dirty bomb, and Chavez’s growing alliance with Iran, this signals big plans to expand terrorism on a global scale.

Colombia today has a superior military force, thanks in part to Mr. Chávez’s purge of his own officer corp as a way to minimize risks of a coup d’etat against him. The war bluster is especially phony because Mr. Chavez is already waging his own guerrilla campaign against Colombia through his support for the FARC. The FARC’s “foreign minister,” Rodrigo Granda, was nabbed three years ago by bounty hunters in Caracas, where he was living comfortably, and a former Venezuelan military officer told us years ago that the army was instructed not to pursue the FARC in the Venezuelan jungle.