It didn’t take long, but Cecilia remarries after Nicolas Sarkozy divorce. She married the guy she was with in 2005:

Mr Attias, 48, was the Moroccan-born Jewish lover Miss Ciganer-Albeniz, 50, left her ex-husband for in 2005, only to return to Mr Sarkozy’s side in the run-up to the French presidential elections last year.

I probably ran into her at the time. One day I was in New York walking down Fifth Avenue by one of the hotels. There were a couple of guys with cameras across the street, and on the same sidewalk. Suddenly they all picked up their cameras and started taking pictures of a woman wearing jeans and a white shirt who had just come out of the hotel with a man by her side. The following Thursday, I saw the photograph of the woman on the cover of the latest Parish Match. But I digress.

Cecilia’s wedding was held at the Rainbow Room on the Rockerfeller Centre’s 65th floor and featured singers from the Harlem Gospel Choir, and was preceeded by a three-day celebration involving dinners and a trip to see the Broadway musical Mamma Mia. Somebody must like Abba, but the musical has a wedding theme.

Christies is auctioning nude photos of Sarko’s current wife, Carla Bruni. I’m not sure why these photos come as any surprise to anyone.

An official from France’s state television company said the broadcaster would likely boycott the Games if coverage was censored. 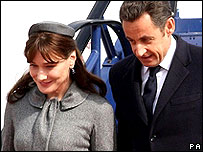 In an interview, Mr Sarkozy said that it was time to reinvent the cross-Channel relationship from the strategic co-operation enshrined in the entente cordiale to become one of genuine closeness and “hand-in-glove” warmth.
…

Launching a charm offensive designed to realign French foreign policy, Mr Sarkozy told the BBC via a translator: “Whoever the British leader may be he will need others, other Europeans.

Times on Line has a feature on the trip, Sarkozy state visit: follow it live here

He emphasised France’s commitment to the Nato-led alliance in Afghanistan, saying that his country had no intention of pulling out troops and may even be prepared to send in more.

“In Afghanistan what’s at stake, it’s part of our battle against world terrorism,” he said. “Do we need a new strategy in Afghanistan? Perhaps. Placing more trust in the Afghans themselves? The answer is yes.

“We have to see how long we are prepared to stay…If all the terms and conditions are met, why not send in more troops?”

The Sarkos will be in the UK for thirty-six hours.

Unrelated, but of interest, Maria sent A Guide to the French.