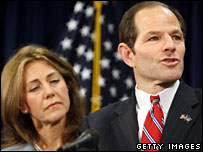 While I certainly got a good chuckle out of the Spitzer news, I am rather intrigued by the question of why would a judge put his job on the line to approve the wiretap on the governor.

Surely, saying “we want to wiretap Spitzer because he’s seeing call girls” wouldn’t have been enough for a judge to go along.

It Wasn’t the Sex; Suspicious $$ Transfers Led to Spitzer

Mind you, Spitzer prosecuted enough prostitution rings to KNOW that would be the sure way to get found out:

Spitzer, who made his name by bringing high-profile cases against many of New York’s financial giants, is likely to be prosecuted under a relatively obscure statute called “structuring,” according to a Justice Department official.

Structuring involves creating a series of financial movements designed to obscure the true purpose of the payments.

Prosecutors reportedly have a series of e-mails and wiretapped phone conversations of Spitzer.

In a interview two years ago, Spitzer, then-attorney general, told ABC News he had some advice for people who break the law. “Never talk when you can nod, and never nod when you can wink, and never write an e-mail because it’s death. You’re giving prosecutors all the evidence we need,” he said.

He winked, he nodded, he email.

The stupendously deluded belief that the sitting Governor of New York could purchase the services of prostitutes was merely the last act of a man unable to admit either the existence of, or need for, limits.

In today’s podcast at 11AM Eastern Rick Moran joins us to talk about Spitzer, and also about Barak Obama and Tony Rezko. I’ll also rant about all these political “wee wifeys” standing by their men, too.

UPDATE 2
The Governor, by the Competitive Enterprise Institute: