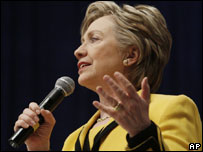 I don’t have the time, the inclination or the pay to comb through the 11,000 pages of Hillary’s daily schedules, but the press have been looking at them. Her schedule slowed down after her healthcare plan bombed, and the Washington Post says,

The schedules became less detailed in late 1993. Foster’s death and the naming of a special prosecutor with subpoena power to investigate Whitewater had a chilling effect on putting things in writing, Clinton aides have previously said.

Betsy points out that – of course – any mention of anything that might have reflected poorly on Hillary’s tenure as First Lady has been deleted. The documents include only Hillary Clinton’s public schedules, not her private calendar.

The more important issue in the current Clinton campaign is whether Hillary is credible on her claims of “foreign policy experience”; the answer is no: Clinton a long way from the White House at key foreign policy moments

The he Clinton campaign claimed on Wednesday that the release of the papers would show Clinton to have been an influential advocate at home and around the world on behalf of the US. But the documents from her office in the White House threaten to undermine her claim to have played a major role in Clinton’s foreign policy decisions.

For instance, Clinton has said she helped negotiate the April 1998 Good Friday agreement between warring factions in Northern Ireland. But while Catholic and Protestant figures hashed out last-minute details of a power-sharing agreement in Belfast, Clinton was at the National Press Club in Washington at a party honouring Bella Abzug, a congresswoman from New York City who had died recently. While President Clinton phoned major participants in the peace talks, she met with Holocaust survivor Elie Wiesel and joined a farewell party for Democratic operative Karen Finney. On the day the agreement was actually signed, she met with Philippine first lady Amelita Ramos.

When Nato launched air strikes against Serbia in an attempt to punish Yugoslav president Slobodan Milosevic for the country’s onslaught against ethnic Albanian separatists in Kosovo, Clinton toured ancient Egyptian ruins, including King Tut’s tomb and the temple of Hatshepsut. She dined at the Temple of Luxor, and stayed overnight at the Sofitel Winter Palace Hotel there.

On August 20, 1998, Bill Clinton ordered US missile strikes on suspected terrorist sites in Sudan and Afghanistan. The president and Hillary Clinton were on holiday on Martha’s Vineyard, a posh island vacation spot off the coast of Massachusetts. After announcing the attack, Clinton cut short his break and returned to Washington to confer with his national security team; Hillary Clinton remained on the Vineyard until August 30, her records show.

There are other key foreign policy dates when the record is not so clear: on the day the presidents of three Balkan states signed a peace agreement in Dayton, Ohio, in November 1995, ending years of ethnic violence in the former Yugoslavia, Clinton’s file lists no public schedule for that day, but indicates she was in Washington.

I’ll have to check my records, but I might have been in Washington that day, too.