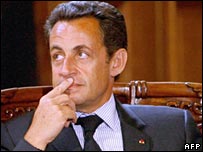 President Nicolas Sarkozy affirmed France’s commitment to a strategy of nuclear deterrence, saying that countries in the Middle East and Asia are developing missiles that pose a threat to Europe.

“Everyone must be aware today that powerful nuclear missiles can reach Europe in less than half an hour,” Sarkozy said in the Channel port of Cherbourg on a visit to France’s latest and fourth nuclear-powered submarine, Le Terrible.

“I am thinking in particular of Iran,” Sarkozy said in a speech to military personnel. “Iran is increasing the range of its missiles, while serious suspicions surround its nuclear program. It is Europe’s security that is the issue.”

Possibly to counter the Iranian threat, Sarkozy has been paying a lot of attention to the Middle East and Arab countries:

He’s currently pushing his “Club Med” idea, i.e., the Union for the Mediterranean. So far it’s not flying,

Analysts blame the disappointing results of the process so far partly on the Israeli-Palestinian conflict, but also on Mediterranean governments’ poor record in using the EU funds on offer.

But his nuclear power deals with Saudi Arabia, the United Arab Emirates, Qatar, Libya, Egypt, Algeria and Morocco are going ahead. As I said last January upon reading the question, “Why should Arab countries be deprived of the energy of the future?”

Sarko has already made himself clear when it comes to the Iranian bomb: “No nuclear weapon for Iran, an arsenal of sanctions to convince them, negotiations, discussions, firmness.“

Today, however, Sarkozy has pledged to reduce France’s number of airborne nuclear weapons by one third:

Mr Sarkozy said the reduction to fewer than 300 missiles would leave France with “half the maximum number of warheads we had during the Cold War”.

But he also insisted he was committed to France’s nuclear deterrent, saying it was its “life-insurance policy”.

He made the comments in a major defence policy speech after inaugurating a new nuclear-armed submarine, the Terrible.

Let’s hope the Terrible works better than its name implies, but let’s ask one question: Is it a good idea to reduce the nuclear arsenal while trying to prevent the Iranians from starting one?

I forgot to point out that the missiles that Pres. Sarkozy is deactivating are all older models with single warheads. All the rest and the newer models are MIRV with 6 nuclear devices each, 1800 in all. I feel the aura of peace already.