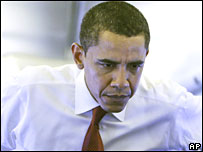 Any assertions that the associations between each of them respectively are the same are absurd, though, for reasons noted above. Both candidates are getting endorsements from other people in addition to Hagee and Farrakhan that they’d probably just rather see wither away quietly into the night, but Obama’s relationship with Wright is more than just an “endorsement” – Obama has long been associated with Wright, admired him, and as I’ve talked about before, has sought counsel from him and has cited him as a source of inspiration for his second book and his 2004 keynote. He even consulted Wright on whether or not he should run for president. Farrakhan’s endorsement of BO probably would have elicted barely more than a chuckle and an eyeroll from people if Wright himself had not previously praised him.

She also has the video of the Fox News interview:

Let’s review here:
Obama has been

Additionally, the title of his book, The Audacity of Hope, comes from one of Wright’s own sermons
BUT in the interview he says that none of Wright’s statements were statements “he had heard himself personally in the pews”.

It means he’s pulling a con, an okey-dokey

You all know the okey-dokey, when someone’s trying to bamboozle you, when they’re trying to hoodwink you?

Obama knew what his pastor was saying.

In an answer worthy of Clintonian dissembling, Obama claims that

The statements that Rev. Wright made that are the cause of this controversy were not statements I personally heard him preach while I sat in the pews of Trinity or heard him utter in private conversation

Major Garret asked him, “If you had known what he was saying, you would have quit the church”, to which Obama replied, “If I had heard them repeated I would have quit”.

It is impossible to believe that someone didn’t know what the pastor of his church, a man with whom Obama has been in such close association that he refers to him in the above video as “almost an uncle”, has been saying, preaching and writing for the past two decades. But Obama wants you to believe he never heard Wright say any such things.

As Ace said, he should have read the church bulletin.

The con is that, as Mona Charen points out,

I am coming to believe that Barack Obama is one of the greatest con artists we’ve seen. His entire campaign has been about “coming together,” a post-racial consensus, etc. Any mention of his middle name was immediately condemned as ignorant fear-mongering. He has played the role of racial unifier with great skill and finesse.

If you are to trust at face value what Obama says, then Barack Obama is well on his way to becoming the political Candide

a youth whom Nature had endowed with a most sweet disposition. His face was the true index of his mind. He had a solid judgment joined to the most unaffected simplicity; and hence, I presume, he had his name of Candide.

Not only has Obama been ignorant of Wright’s odious position, he’s also saying he had no idea of how much money Rezko had raised for his campaign because “he had never asked for a political favor”:

Trying to put his past with Antoin “Tony” Rezko behind him, presidential candidate Barack Obama on Friday said he never thought the nowindicted Chicago businessman would try to take advantage of him because his old friend had never asked for a political favor.

But in a 90-minute interview with Tribune reporters and editors, Obama disclosed that Rezko had raised more for Obama’s earlier political campaigns than previously known, gathering as much as $250,000 for the first three offices he sought.

Obama also elaborated on previous statements about his private real estate transactions with Rezko, saying they were not simply mistakes of judgment because Rezko was under grand jury investigation at the time of their 2005 and 2006 dealings. “The mistake, by the way, was not just engaging in a transaction with Tony because he was having legal problems. The mistake was because he was a contributor and somebody who was involved in politics.”

Barack’s doing well in his dissembling, but I digress:

Obama rejected the suggestion that, by paying the full price for the lot, Rezko was enabling Obama to buy the house for $300,000 less than the initial asking price.

I am blinded by the brilliance. You can even say I’m baffled by the bullsh*t, too.

Faced with intensifying scrutiny as the Democratic primary season grinds on, Obama said voters should view his Rezko dealings as “a mistake in not seeing the potential conflicts of interest.” But he added that voters should also “see somebody who is not engaged in any wrongdoing . . . and who they can trust.”

It all comes down to the audacity of hoping they’ll believe you (h/t Instapundit).

Must-reads regarding Obama and Jeremiah Wright