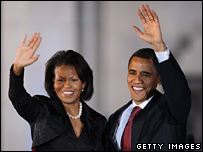 Last Saturday Belmont Club had an excellent essay on racialist theologies, which you should read in its entirety,

Racialist theologies are so absurd that they are probably atheisms or political programs in religious disguise. Ivan in the Brothers Karamazov renounces God out of a love for mankind; he wants to supplant the deity with man. And when Jeremiah Wright puts a black man on the Throne of God we should recognize the obvious: that there is no God left after the transaction, only a man raised as high as human hands can hold. Dostoevky’s character Kirilov observed “if you shoot yourself, you’ll become God, isn’t that right?” Or as Cone put it orbicularly “Hope is the expectation of that which is not. It is the belief that the impossible is possible, the ‘not yet’ is coming in history.” He might have been talking about Obama.

Belmont Club links to The peculiar theology of black liberation, a must-read.

Obama took a brief vacation last weekend with his family in the Virgin Islands.

Apparently Obama stayed at the home of a well-known black nationalist, while Wright stayed at the Ritz Carlton Great Bay instead of tending to his congregation in Trinity Church during the highest of all Christian Holy Days.

Pamela has more on the VI trip.

More recently, Obama has released his tax records and urges Hillary to release hers before the Pennsylvania primary.

Fat chance on that.

If you read the article on the Obama tax records, you can see that earning $1.6 million in one year apparently was no reason for Ivy League-educated Michelle Obama to have pride in the land which affords her and her husband such riches and opportuniy, but clearly Michelle allocates her pride sparingly.

In an article he penned for the anti-Israeli website Electronic Intifada, Abunimah wrote:

“The last time I spoke to Obama was in the winter of 2004 at a gathering in Chicago’s Hyde Park neighborhood. He was in the midst of a primary campaign to secure the Democratic nomination for the United States Senate seat he now occupies. But at that time polls showed him trailing.

“As he came in from the cold and took off his coat, I went up to greet him. He responded warmly, and volunteered, ‘Hey, I’m sorry I haven’t said more about Palestine right now, but we are in a tough primary race.

‘I’m hoping when things calm down I can be more up front.’ He referred to my activism, including columns I was contributing to the The Chicago Tribune critical of Israeli and US policy [and said:] ‘Keep up the good work.’
…
The Arab-American activist went on to say: “In 2000, when Obama unsuccessfully ran for Congress I heard him speak at a campaign fundraiser hosted by a University of Chicago professor. On that occasion and others Obama was forthright in his criticism of US policy and his call for an even-handed approach to the Palestinian-Israeli conflict.”

Michael Goldfarb today posts on Obama’s Jewish problem, related not only to por-Palestinian sympathies, but also to Trinity Church’s publication of an open letter to Oprah Winfrey by Ali Baghdadi, “Middle East advisor to the Honorable Elijah Muhammad the founder of the Nation of Islam, as well as Minister Louis Farrakhan”. The letter says,

The Israelis were given a blank check: they could test whenever they desired and did not even have to ask permission. Both worked on an ethnic bomb that kills Blacks and Arabs

Obama has a Jewish problem, whether or not it’s merely guilt by association is irrelevant. Politics is about perception, and the perception is that Obama’s one step removed from the Nation of Islam. If he wants to get the anti-Semitic stench of Trinity United off his campaign, it’s going to take more than the all-clear from Marc Ambinder and Marty Peretz.

A lot more, and racialist theologies won’t be the answer.