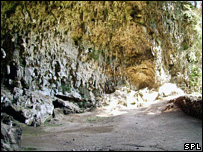 Apparently those fossilized “hobbits” that were found a while ago weren’t what scientists thought they were. The Beeb says, New twist in Hobbit-human debate, and the article describes the “hobbits” in genteel terms.

Leave it to the Daily Mail to call a spade a spade (h/t Mara):
Island’s ancient dwarf men were not hobbits, but cretins

They claim the so-called “hobbits” were in fact a backward group of humans, suffering from what the researchers describe as cretinism – caused by a nutritional deficiency.

Can’t wait until the the Great Ape Project complains about the name-calling.