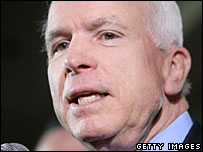 Sen. John McCain, the Republican Party’s presumptive nominee for president who has linked his political future to U.S. success in Iraq, was in Baghdad on Sunday for meetings with Iraqi and U.S. diplomatic and military officials, a U.S. government official said.

This is McCain’s eighth visit, his first one as the Republican nominee. He’s cementing relationships, and starting new ones,

“We were informed that John McCain landed in Iraq Sunday morning. A meeting will take place with the Iraqi government,” said Ali al-Moussawi, an official in the prime minister’s office.

McCain was to meet Sunday with Deputy Prime Minister Barham Saleh. Later in the day, he and Gen. David Petraeus, the top U.S. commander in Iraq, were to talk. It also was thought McCain would meet with al-Maliki.

He is expected to meet with British Prime Minister Gordon Brown for the first time, and French President Nicolas Sarkozy for the third time. He met and corresponded with Sarkozy both before and after the French president was elected. They last saw each other last summer.

The AP article, accompanied by a most unflattering photo of McCain, at least managed to mention,

A defiant supporter of the 2003 invasion and President Bush’s troop increase last year, McCain is likely to focus in Iraq on the drop in sectarian violence and U.S. and civilian casualties since last summer.

Remind me now, how many times has Obama been to Iraq?