One of the great flaws in American foreign policy is that second-term presidents start looking to their “legacy” and of course want to be The one who make permanent peace in the Middle East possible. 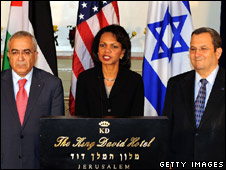 The Bush administration is now in full “paving the legacy” mode: US says Mid-East peace on track

What does “on track” mean? It means more concessions from Israel, of course.

(ANSAmed) – TEL AVIV, MARCH 31 – U.S. Secretary of State Condoleezza Rice, during her third Middle East trip for the past months, received from Israel a list of measures which will be introduced in the immediate future to ease the living conditions in the West Bank.

The 35-page dossier includes the construction of thousands of new homes in Ramallah; the removal of “some 50” roadblocks along the roads in the West Bank and of a military checkpoint; the strengthening of the operative capacities of the police of the Palestinian National Authority (PNA) and several thousand new entrance permits in Israel for Palestinian workers.

“We’ve been told that this is going to start and, hopefully even be completed in a relatively short period of time. I am expecting it to happen very, very soon,” Rice said. Saturday, Rice met in Jerusalem Prime Minister Ehud Olmert. Yesterday, she met Palestinian Prime Minister Salam Fayad for the first time together with Israeli Defence Minister Ehud Barak, then had talks with Israeli Foreign Minister Tzipi Livni and the leader of the rightist opposition Benyamin Netanyahu (Likud). Rice also visited Amman for a meeting with PNA President Mahmoud Abbas (Abu Mazen). Today she will meet Olmert again.

In a move, which Barak defined as “calculated risk”, Israel has also decided to remove from the streets in the West Bank some 50 roadblocks (of the over 459 counted by the Israeli human rights organisation Betselem) and a military checkpoint (of a total 99) south of Jericho from where Palestinians will be able to reach the northern coast of the Dead Sea, a famous tourist destination, so far forbidden.

Say good-bye to the resorts.

Israel will allow the construction north of Ramallah of between 5,000 and 8,000 homes for Palestinians, a measure announced a year ago and affirmed now.

Israel has also agreed to grant 5,000 work permits to Palestinians, to add to the previously issued 18,500 permits.

The functioning of the PNA police will be strengthened: the Palestinian police will be allowed to dislocate 700 agents in Jenin, while 25 Russian armoured vehicles will enter service in Nablus.(ANSAmed).

I have said in the past that there is no “cycle of violence” because Israel will be bombed no matter what.

Why do I believe this?
Because I’ve been watching the puppet shows.

UPDATE, Tuesday 1 April
What if Condoleezza Rice came to Jerusalem, and nobody cared?, via Judith.