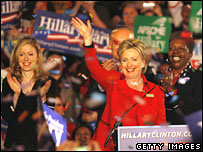 Mrs Clinton insists she can go all the way to the White House says the Beeb.

Quaint phrase that reminds me of my high school years…

The perpetrators were members of Armed Forces of National Liberation, FALN (the Spanish acronym), a clandestine terrorist group devoted to bringing about independence for Puerto Rico through violent means. Its members waged war on America with bombings, arson, kidnappings, prison escapes, threats and intimidation. The most gruesome attack was the 1975 Fraunces Tavern bombing in Lower Manhattan. Timed to go off during the lunch-hour rush, the explosion decapitated one of the four people killed and injured another 60.

FALN bragged about the bloodbath, calling the victims “reactionary corporate executives” and threatening: “You have unleashed a storm from which you comfortable Yankees can’t escape.” By 1996, the FBI had linked FALN to 146 bombings and a string of armed robberies — a reign of terror that resulted in nine deaths and hundreds of injured victims.

On Aug. 7, 1999, the one-year anniversary of the U.S. African embassy bombings that killed 257 people and injured 5,000, President Bill Clinton reaffirmed his commitment to the victims of terrorism, vowing that he “will not rest until justice is done.” Four days later, while Congress was on summer recess, the White House quietly issued a press release announcing that the president was granting clemency to 16 imprisoned members of FALN. What began as a simple paragraph on the AP wire exploded into a major controversy.
…
While the pardon scandals that marked Bill and Hillary Clinton’s final days in office are remembered as transactions involving cronies, criminals and campaign contributors, the FALN clemencies of 1999 should be remembered in the context of the increasing threat of domestic and transnational terrorism that was ramping up during the Clinton years of alleged peace and prosperity. To wit, the 1993 World Trade Center bombing, the 1995 Tokyo subway Sarin attack, the 1995 Oklahoma City bombing, the 1995 “Bojinka” conspiracy to hijack airplanes and crash them into buildings, the 1996 Khobar Towers bombing, the 1996 Summer Olympics bombing, Osama bin Laden’s 1996 and 1998 “Declarations of War” on America, the 1998 East African embassy bombings, the 2000 USS Sullivans bombing attempt, the 2000 USS Cole bombing, and the 2000 Millennium bombing plot.

The machine beat the mantra.

Last week I posted Paul’s questions to Obama. It’s worth following up with Q&A: Barack Obama and Tony Rezko

Why is Mr Rezko on trial?
Mr Rezko went on trial in Chicago this week for money laundering, fraud, aiding bribery and attempted extortion. He is accused of demanding kickbacks from companies seeking to do business with two Illinois state boards controlled by his friends – the Teachers Retirement System, which manages a $30 billion pension fund, and the Illinois Health Facilities Planning Board, which must approve all building permits involving hospitals.

Is Mr Obama involved in the case?
Mr Obama is not accused of any wrongdoing. However, money from one of the many alleged kickbacks appears to have ended up as a $10,000 donation to his campaign. There is speculation that Mr Obama could be called as a defence witness at the three-month trial. Mr Obama has donated to charity $150,000 in political contributions linked to Mr Rezko.

Where does Nadhmi Auchi fit in?
Mr Rezko ended up in prison in January for violating bail by failing to declare a $3.5 million loan from Nadhmi Auchi, a British-Iraqi billionaire who was convicted of corruption in the Elf scandal in France in 2003. Mr Auchi was involved with Mr Rezko in a pizzeria business in the Midwest as well as a 62-acre property development in Chicago, and had lent millions of dollars to him.

An earlier $3.5 million dollar loan to Mr Rezko was made only weeks before Mrs Rezko bought the garden next to the Obamas’ new house. Mr Auchi says the loan was for business reasons.

Gateway Pundit and Martha Colmenares (h/t Larwyn) post that the FARC likes Obama because he doesn’t like the Plan Colombia and would reject the Colombia Free Trade agreement.

Democrats: what do they stand for?

UPDATE:
The Jack effect:
Before:

Photojournalism at its best