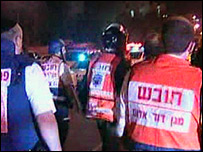 Eight people were killed and nine others were wounded Thursday evening when terrorists infiltrated the Mercaz Harav yeshiva in the Kiryat Moshe neighborhood in Jerusalem, police said.

A single terrorist infiltrated the yeshiva, possibly armed with an explosive belt, and began firing in every direction. He was shot and killed, police said.

The terrorist couldn’t have chosen a better target in terms of symbolic value if his purpose was to hit at the heart of Judaism. The Mercaz HaRav yeshiva, where eight young men were shot to death on Thursday night is one of the most prestigious centers of religious Jewish learning in the most Jewish city in the Jewish state.

While people in Gaza celebrate and Hamas officials in Gaza welcomed the attack, it won’t be long before someone brings up the fallacy of “disproportionate response”.