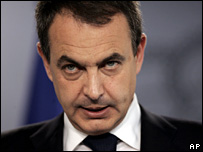 Spanish Pundit: ETA killed Isaias Carrasco, former councilman for the Socialists, by shooting him point-blank in front of his family. Spanish Pundit has lots of links at her post.

Carrasco had just gotten into his car to go to work at 1:30 PM when the ETA gunman fired five shots at him through the windshield, hitting him in the chest with two and in the neck with one. His wife and daughter heard the gunfire and rushed outside as Carrasco got out of his car, stumbled halfway across the street, and fell, still conscious. The gunman, who was tall, wearing a fake beard, and dressed in black, ran to a silver Seat Cordoba in which a getaway driver was waiting, and they escaped. Carrasco died in the hospital less than an hour later.

Carrasco had lost his city council seat in the last municipal election, and had decided to give up his police bodyguard at the end of last year. Most politically active anti-ETA Basques, especially those who hold public office, need official bodyguards.

The mayor of Mondragón, known in Basque as Arrasate, belongs to the ETA-front party ANV; when she arrived at the hospital, Carrasco’s wife told her to get lost.

Gates of Vienna has a Letter from Spain: The E.T.A Steps in Spanish Elections:

Let us remember the first rule of Spanish politics: the result of Spanish national elections is determined by the vote of the “volatile left” a group of two million voters that vote for the PSOE, but only when they want to avoid a government by the right. If they vote, the PSOE will get a majority in Parliament and then the government, if they do not, the PP may manage to get the government. This attack will decide this people to vote; therefore it will benefit the PSOE. Moreover, it is also the interest of the ETA to keep the PSOE in government. El Pais (our NYT) has already called their readers to the voting stations in its headlines today.

Read the rest: their prognosis is not positive.

Iberian Notes states that the lastest survey shows the PSOE (Zapatero’s party) ahead of the PP 43.0% -39.0%.