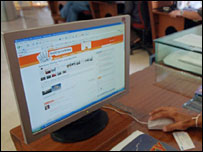 Remember that massive internet failure I posted about on Thursday?

It’s happened again. For three days in a row.

This time it appears ships’ anchors are to blame,

Stephan Beckert, an analyst with TeleGeography, a research company that consults on global Internet issues, said the cables off Egypt were likely damaged by ships’ anchors.

Since ships don’t sail with the anchor down, is it possible to locate what ships were anchored in those locations?

Officials said Friday it was unclear what caused the damage to FLAG’s FALCON cable about 50 kilometers off Dubai. A repair ship was en route, FLAG said.

This is hardly coincidental: as Defense Tech points out,

The abiguity in previous news reporting about whether one or two fiber optic cables were cut in the Med on Tuesday, and whether they were cut in the same place 8 miles off Alexandria or at opposite ends of the Med at the same time, has been replaced by a much worse conundrum. It’s not at all ambiguous now that at least two distinct cables were cut about 250 miles apart, on opposite sides of the huge Arabian Peninsula landmass.

Of course this is the sort of news that lends itself to the wildest speculation. Jules Crittenden has the best theory:

If they experienced as many delays as J (one of my readers who’s been stuck in the Chicago Airport several times in the past 3 months), I fully sympathize.

Time to feed your inner geek: This is what an undersea cable looks like inside:

The Beeb has the details.

UPDATE
J emails to say that his life has become a cheap remake of Trains, Planes and Automobiles, only with him trying to get out of Chicago.