Russia sells weaponry and nuclear technology to the Iranians, and now we’re supposed to believe the Russians are surprised that Iran can do the sum 1 + 1 = 2:
Russia suspicious over Iran test

Russia thinks the launch of an Iranian rocket into space raises suspicion over the true aim of its nuclear programme, a foreign ministry official has said.

Well, slap me sideways with a feather. 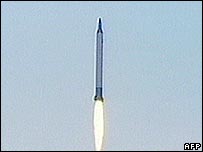 Maybe Putin was taken by surprise that the Mullahs inagurated their own space program on Monday, after the Mullahs went shopping at Arms-R-Us.