Welcome to the Presidents’ Day Edition of the Carnival of Latin America and the Caribbean.

Today’s big news: Venezuela seizes 1/2 ton milk and chicken from clinic, thereby showing how price controls don’t work and encourage hoarding and black markets, and continuing Hugo’s fight against private health care. The news was listed under the “Oddly Enough” category but when it comes to Venezuela, it’s never oddly enough: after nationalizing the oil industry, Chavez is threatening to create a tax on windfall oil profits.

As I said, it’s never oddly enough when it comes to Hugo.

If you would like your posts included in the Monday carnivals, please email me the link: faustaw “at” yahoo “dot” com.

Via Instapundit, Why does Obama hate NAFTA?

BELIZE
The squid and the whales

CHILE
Chile to continue working with Peru despite border dispute

COLOMBIA
War of the roses

Too close to the truth!

ECUADOR
ALLIANCE for Progress only Boosts State Kleptocrats and Marxists 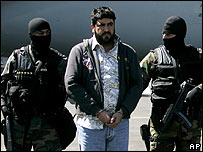 Obama gets another endorsement

PUERTO RICO
Via Instapundit, P.R. Firm: San Juan For The Money, Two For The Show

The unanimity against Tascon: Stalinism in Venezuela

Two posts I missed last week: On SEMANA’s Expose of “Chavez’s own Montesinos”: War by ALL Other Means?, and On Iran’s Increasing Influence in Latin America

CBS’s Rodriguez Asks Chavez’s Ex-Wife: ‘Is He a Communist?’ and Marisabel on CBS. Too bad Rodriguez doesn’t read my blog or he would have known that Chavez officially declared himself a Communist a year ago.

US shrugs off Chavez threat over oil
Your word for the day, Mister Chavez, is ‘Fungible’
Paper tiger

Reaction and revolution: Students are the revolution

An introduction to a lie

Two of my posts, Obama wants to talk to Chavez and in the podcast (you can listen to the podcast here).

And a beautiful rendition of Vete de mi