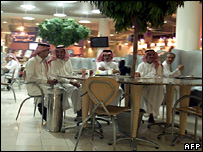 The news: A bunch of guys go to the mall to check out the girls, and they get arrested after the mutaween filed a complaint.

Prosecutors in Saudi Arabia have begun investigating 57 young men who were arrested on Thursday for flirting with girls at shopping centres in Mecca.

The men are accused of wearing indecent clothes, playing loud music and dancing in order to attract the attention of girls, the Saudi Gazette reported.

The How does the Beeb describe the mutaween?

Another attempt of the Beeb to associate American conservatism with Islamist backwardness?