Last December I posted that the Beeb, rather than taking the trouble of finding law-abiding British Muslims that have completely integrated into society, and have them discuss the issues of the day at a nice restaurant, decided instead to take a few acussed terrorists paintballing on February of 2005, paying for the privilege.

All in the name of fun, while filming their program Don’t Panic, I’m Islamic.

The Been was so far above the panic stage that

That is, A BBC producer failed to give police information that would have helped track down the July 21 bombers. 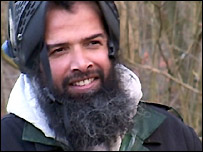 Hamid, by the way, referred to himself as Osama Bin London. On Tuesday he was found guilty of training men in secret camps in the Lake District and New Forest to prepare them to fight abroad, including the four failed suicide bombers of 21 July 2005.