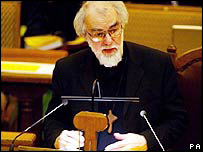 COE Archibishop Rowan Williams declared (click on link for audio file) that integrating some aspects of Sharia law was inevitable in Britain.

As soon as you look at the actual operation of religious law in this country, the picture looks less rosy. Even if the Archbishop didn’t have in mind barbaric punishments such as stoning women to death for adultery, there is plenty of evidence that sharia courts are a means of consolidating patriarchal power in societies where Muslim women have begun to demand the same rights as men. The Department for Work and Pensions recently made an astonishing decision to pay state benefits to Muslim men for each of their wives, as long as the marriages were contracted legally abroad. Bigamy is illegal in Britain and the spectacle of the Government colluding in the practice of polygyny – not polygamy, for Muslim women cannot have four husbands – is a signal that ministers are losing their moral compass on the subject of women’s rights.

We are only just beginning to realise the extent of violence against women from ethnic minorities. Last week, Commander Steve Allen, who leads for the Association of Chief Police Officers on honour-based violence, gave evidence to the Home Affairs Committee. Responding to a question about whether forced marriage and “honour” crimes are under-reported in this country, Allen responded with a single word: “Massively”. He believes the real level of violence might be 35 times higher than the number of cases (around 500) reported each year to the police and the Foreign Office forced marriage unit.

If a woman is running away from her parents or a violent husband, mosques and sharia courts are not the obvious place for her to turn to get justice. The Centre for Social Cohesion study contains a startling insight into attitudes in one British mosque, reported by Mohamed Baleela, a team leader at the Domestic Violence Intervention Project in Hammersmith, west London. “Last time I talked about marital rape in a mosque,” he said, “I nearly got beaten up. Because we said that the law makes it illegal to rape your wife, someone got up and hit me because he was ignorant of the law.”

The most powerful argument, that all people in a country are subject to the same laws – indeed, that the rule of law applies to all – appears to be lost to the Archibishop, but not on Smith, who also points out that

indeed the European Court of Human Rights ruled in 2003 that sharia is incompatible with the fundamental principles of democracy and European values. Secular law protects people’s right to practise their religion, but it also protects them from aspects of their faith which are unjust and oppressive.

Too bad the Archibishop and his followers can’t seem to remember that; as you can listen in the above audio clip, he actually dismissed the European Court of Human Right’s decision.

Most disturbing of all, Williams believes that the law should be shaped by “individual affiliations” and “individual loyalties”, and believes that “a law that says that there’s a law for everybody and that’s all needs to be said” is “a bit of a danger”.

So long, rule of law.