Following up on the Imad Mughniyah news, TIME is posting a story with a Hezbollah Media Office/AP byline. At least we know who sent it. The son of a bitch is referred to as a “militant”, of course, a “freedom fighter” whose “misdeeds” granted him such a “mythical status that sometimes it was not always certain if he really existed at all”.

He existed, alright, and he killed hundreds of people. 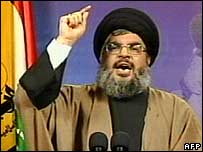 He insisted: “The blood of Imad Mughniyeh will make them [Israel] withdraw from existence.”

Not that Nasrallah was all that conciliatory towards Israel to begin with.

Nasrallah’s accusations are just one of the many conspiracy theories going around the Mughniyeh explosion: Siggy’s posting about All Kinds Of Certainty,

Then there’s the childhood trauma theory (which, as to be expected, is blamed on the Jews) and some more speculation on Syria, too.

But one thing is clear, whoever did it, did mankind a favor. Even the French agree.