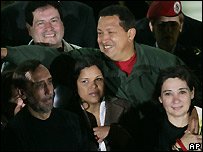 Continuing his effort to remain relevant, Chavez has “brokered” the release of four more hostages, or so says the news,
Colombian hostages freed by Farc

Four hostages held by Colombian left-wing Farc rebels have been released, in a deal brokered by Venezuelan President Hugo Chavez.

The four had a tearful reunion with relatives after being released in the Colombian jungle to Venezuelan envoys.

The Farc says it will not free more hostages until Colombia creates a demilitarised zone for talks.

The four are former members of the Colombian congress.

The BBC assesses the situation, which has four salient elements:
1. Be releasing a few hostages at a time, the FARC keeps itself in the headlines and maintains pressure on Uribe.
2. Chavez continues to be their tool, insisting that the FARC is not a terrorist organization. The French are not impressed.
3. Unfortunately, the efforts by France to keep Ingrid Betancourt in the news have backfired, making her a most valuable hostage among all the hostages.
4. The Colombian government is on the record saying they will negociate prisoner exchanges but that there will be no demilitarized zone, and Uribe will continue his “Democratic Security” policy.

Uribe has broad support in his country, and I wish the US Congress would approve a free trade agreement with Colombia.

Gateway Pundit has more on the hostages.