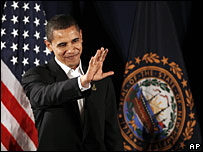 The Obama rallies bear more than a passing resemblance to old religious revival meetings, complete with fainting spells: James Taranto’s We Shall Be Overcome (love that title!) itemizes a few spells.

There’s even a blog dedicated to the cult of Obama (h/t Beth).

Ace, however, wants to know How Come Women Right In The Front Rows Of Every Obama Speech Seem To Faint At The Same Point?

To wit, having someone scout out the “talent” — those who looked likely to fall to the ground in an ecstatic conniption — and making sure they were seated front and center.

Andrew Sullivan wasn’t fainting at an Obama speech on taxes last year; instead he was dozing off from boredom (clearly the speech must have been before Obama got his campaign teleprompter).

While Sullivan has a point which the Republicans would be well advised to remember,

What people fail to understand is that in politics, words are also substance. The ability to inspire people is not inherently a dangerous phenomenon. It is sometimes critical to effective governance. Conservatives used to understand this. Perhaps Churchill’s greatest actual weapon was the English language. It did things no bureaucrat, soldier, armament, or policy could do. The core of Ronald Reagan’s success was his rhetorical ability to reach over the heads of the Washington process to the people who can force Washington to change: the American people. And I don’t recall conservatives decrying the rhetoric of hope reacting to George W. Bush’s inspired speeches after 9/11.

Sullivan makes the mistake of decrying “The Ignorance of the Right” by picking on… Victor Davis Hanson.

Of all the people to pick on, Hanson?

If there’s a word that would not describe VDH, ignorance would be it.

VDH points at The Problems with Obama

Under pressure to produce some facts and specifics, the Obama team is beginning to release a little on the economy, taxes, and new entitlements. But the problem is that Obama himself seems not familiar with the details, and still prefers talking only about hope and change. Wonks releasing details doesn’t solve the problem. And it won’t, until he, the candidate, can talk in serious fashion ex tempore about the specifics he wants to achieve.

VDH also asks Obama to Spare Us the Elite Populism.

To those of us who are reading what Obama has to say on the economy, here’s what it all comes down to: bigger-yet government, and higher taxes.

Mona Charen has been paying attention to Obama’s platform, and she’s not fainting:

But when you get past the music and really focus on the lyrics, Obama emerges as an utterly conventional, down-the-line liberal Democrat. He claims to be all about the future, but his policy ideas are about as modern as disco and the leisure suit.

Change? Of course. That’s why we have presidential term limits.

But that’s no reason to get the vapors.

UPDATE
Revival meetings, alright: Michelle Obama gave a speech at UCLA earlier this month in which she told supporters that her husband was the only man who could fix American souls — if we elect him President first.

“Is this reality or political theater? You decide:“