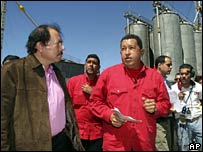 From that arm of the Vast Right Wing Conspiracy, the Guardian has an eye-opening report by John Carlin (emphasis added), Revealed: Chavez role in cocaine trail to Europe

Farc has come a long way from its leftist revolutionary roots and is now commonly referred to in Colombia and elsewhere as ‘narco-guerrillas’. Pushed out to the border areas, it has been rendered increasingly irrelevant politically and militarily due to the combined efforts of Colombia’s centre-right President, Alvaro Uribe, and his principal backers, the United States, whose Plan Colombia, devised under the presidency of Bill Clinton, has pumped hundreds of millions of dollars into the Colombian military and police. A large part of Plan Colombia is designed to eradicate the vast coca plantations cultivated and maintained by Farc and other Colombian groups.

However, the impact on Farc has been ambiguous: its chances of launching a left-wing insurrection in the manner of Nicaragua’s Sandinistas in 1979 are nil, but then they probably always were; yet it looks capable of surviving indefinitely as an armed force as a result of the income from its kidnapping, extortion and cocaine interests.

Helping it to survive, and prosper, is its friend and neighbour Hugo Chávez. The Venezuelan President sought to extract some international credit from the role he played as mediator in the release last month in Venezuelan territory of two kidnapped women, friends of Ingrid Betancourt, a French citizen and former Colombian presidential candidate held by Farc for six years. But Chávez has not denounced Farc for holding Betancourt and 43 other ‘political’ hostages.

The Venezuelan government is in collusion with the FARC:

All the sources I reached agreed that powerful elements within the Venezuelan state apparatus have forged a strong working relationship with Farc. They told me that Farc and Venezuelan state officials operated actively together on the ground, where military and drug-trafficking activities coincide. But the relationship becomes more passive, they said, less actively involved, the higher up the Venezuelan government you go. No source I spoke to accused Chávez himself of having a direct role in Colombia’s giant drug-trafficking business. Yet the same people I interviewed struggled to believe that Chávez was not aware of the collusion between his armed forces and the leadership of Farc, as they also found it difficult to imagine that he has no knowledge of the degree to which Farc is involved in the cocaine trade.
…
What no one disputes, however, is that Chávez is a political ally of Farc (last month he called on the EU and US to stop labelling its members ‘terrorists’) or that for many years Farc has used Venezuelan territory as a refuge. A less uncontroversial claim, made by all the sources to whom I spoke (the four disaffected guerrillas included), is that if it were not for cocaine, the fuel that feeds the Colombian war, Farc would long ago have disbanded.
…
Thirty per cent of the 600 tons of cocaine smuggled from Colombia each year goes through Venezuela. Most of that 30 per cent ends up in Europe, with Spain and Portugal being the principal ports of entry. The drug’s value on European streets is some £7.5bn a year.

The infrastructure that Venezuela provides for the cocaine business has expanded dramatically over the past five years of Chávez’s presidency, according to intelligence sources. Chávez’s decision to expel the US Drug Enforcement Administration from his country in 2005 was celebrated both by Farc and drug lords in the conventional cartels with whom they sometimes work. According to Luis Hernando Gómez Bustamante, a Colombian kingpin caught by the police last February, ‘Venezuela is the temple of drug trafficking.’
…
The deserters I interviewed said that not only did the Venezuelan authorities provide armed protection to at least four permanent guerrilla camps inside their country, they turned a blind eye to bomb-making factories and bomber training programmes going on inside Farc camps. Rafael – tall and lithe, with the sculptured facial features of the classic Latin American ‘guerrillero’ – said he was trained in Venezuela to participate in a series of bomb attacks in Bogotá, Colombia’s capital.

Co-operation between the Colombian guerrillas and the Venezuelan government extended, Rafael said, to the sale of arms by Chávez’s military to Farc; to the supply of Venezuelan ID cards to regular guerrilla fighters and of Venezuelan passports to the guerrilla leaders so they were able to travel to Cuba and Europe; and also to a reciprocal understanding whereby Farc gave military training to the Bolivarian Forces of Liberation, a peculiar paramilitary group created by the Chávez government purportedly for the purpose of defending the motherland in case of American invasion.

There is lots more at the article. Go read every word. More at PrariePundit via Larwyn.

Meanwhile, Hugo continues to call for an anti-US alliance.