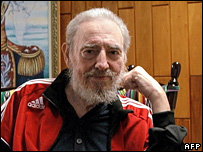 Fidel Castro announced his resignation as president of Cuba and commander-in-chief of Cuba’s military on Tuesday, according to a letter published in the state-run newspaper, Granma.

Here’s the announcement at Granma (also at Pinceladas de Cuba, via Cubanology). Babalu has the translation. I guess the “resignation” now makes Raul the 18th-worst world dictator.

Michelle Malkin was up early with the first roundup, and A Newt One has lots more.

Alberto predicts a new barrage of puff pieces, but the Beeb was way ahead of the curve:
Without a hint of irony, the BBC refers to Castro as the great survivor. Never mind that Castro has “survived” thanks to the medical treatment rendered by a Spanish gastro-oncologist, and has stayed in power for forty-nine years because he is a tyrant; a tyrant who has ruined an entire country in every possible way. The Beeb insists that

Cuba under his rule has made impressive domestic strides.

Why? Because of the medical apartheid system, and the statistics provided by the closed Communist state where transparency doesn’t exist:

Good medical care is freely available for all, there is 98% literacy, and Cuba’s infant mortality rates compare favourably with Western nations.

Several of Babalu’s commenters noted that Fidel’s resignation now forces a string of long delayed actions. First, Raul Castro (Fidel’s brother who is no more than a few years younger and a drunk) must now emerge from the shadow of the old leader; and equally important, US politicians especially in the Democratic party, who must face the fact that the Countdown has begun.

The countdown to a transition officially begins today.

I wouldn’t rush things, Ed. After all, Fidel says in his resignation letter,

No me despido de ustedes.
This is not my farewell to you

And Pres. Bush only has less than a year in office.

Let’s transition to a free, democratic Cuba; we all should pray for that!

Siggy and I will be talking talked about the news in this morning’s podcast at 11AM Eastern with Val Prieto of Babalu Blog; Andy Blom of Hawaiian Values.US joined us later to talk about the Akaka Bill.

More:
Good news and bad news from Cuba
Castro Goes Out With a Whimper– Bush Hopes For Democracy
Guess they asked the corpse if it wanted to continue ruling, and then they shook the coffin
Castro Death Watch sees little change.
Jawa looks at Fidel’s “impediment”.

Other bloggers
Dreams Into Lightning
Tim Blair
Blog of the Moderate Left
Newshoggers
The American Mind
Outside the Beltway
Sister Toldjah
While Scores Remain in Power, Main War Criminal Steps Down in Cuba

1PM links
Irish Spy: “Will we see a similar pattern in Cuba, or will the leadership manage the transition to maintain their rule, as the Communist Chinese did after the death of Mao?”
Deadly dead dictator at Snapped Shot

Last link of the day
Francisco Castro is still dead. Or not.