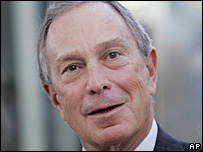 I’m Not Running for President, but …, thank you for not running anyway, Mike.

Will he back McCain, or Obama?

Or will he be content with his new showbiz carreer?

The Air Force is tightening restrictions on which blogs its troops can read, cutting off access to just about any independent site with the word “blog” in its web address.

Perhaps if I changed the blog name to Fausta’s coffee-politics-books-and-shoes parlor?

John Noonan at The Weekly Standard points out,

Also problematic is the fact that USAF bloggers have been among the most credible advocates for force-modernization plans, offering their strong support for the acquisition of the full fleet of 380 F-22s in particular. The Air Force has in one fell swoop discarded a valuable media asset, forcing the public to rely on cumbersome–and typically boring–USAF press releases instead.

Mamacita writes about Two Students: A Contrast. And Then Some More Opinionated Rants.

The answer is NO.

If any of you guys have any doubt, the odds are that a 3-day stubble will remind ladies of Yasser, not Colin, and definitely not of Clive.

I hope that settles the issue.

You can thank me later.