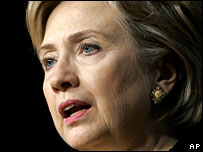 sexism is still confused with nature as racism once was; because anything that affects males is seen as more serious than anything that affects “only” the female half of the human race; because children are still raised mostly by women (to put it mildly) so men especially tend to feel they are regressing to childhood when dealing with a powerful woman; because racism stereotyped black men as more “masculine” for so long that some white men find their presence to be masculinity-affirming (as long as there aren’t too many of them); and because there is still no “right” way to be a woman in public power without being considered a you-know-what.

What crap. Anyone who knows anything about Chilean society knows that any of these “obstacles” are alive and well in Chile; more so in Pakistan, where Benezir Bhutto was elected Prime Minister twice, and India, where Indira Ghandi served four terms as Prime Minister.

For cryin’ out loud, just a few days ago my friend and I were at an exhibition of photographs of Indian widows who had been cast out by their families because their husbands had died. Since they didn’t belong to a man, they were useless. I’m talking about present-day India here. Does Gloria know about this?

I venture guess that neither Indira, or Golda or Lady Thatcher lost a night’s sleep worrying about that. They probably didn’t give a rat’s a**.

In Gloria’s mind, everything is about identity politics. Women, not just women but American women, are the eternal victims of the patriachy.

There’s there something pathetic and embarrassing about identity politics, particularly when

Because the truth is that the more you wrap yourself with the identity politics flag, the less of a “uniter” you can ever be.

And let me add one thing: All of the candidates are looking backwards. The Democrats’ idea of “change” translates to policies that are outdated and useless. The Republicans keep claiming the mantle of being “the next Ronald Reagan”. We do not need either. What we need is a President who will take America’s current challenges and bring it into greater prosperity, liberty and leadership in the world.

So, if you’re a woman running for office, suck it in, drop the identity politics, and spare me the tears.

While you’re at it, give up the Liberal crap. As Gerard not very delicately put it, De-Liberalized Babies of the World Unite. We have nothing to lose but Our Liberals. And THEY are NOT NECESSARY.