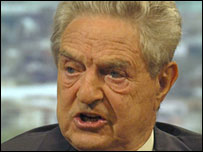 A study by two nonprofit journalism organizations found that President Bush and top administration officials issued hundreds of false statements about the national security threat from Iraq in the two years following the 2001 terrorist attacks.
…
The study was posted Tuesday on the Web site of the Center for Public Integrity, which worked with the Fund for Independence in Journalism.

The Fund for Independence in Journalism mission, in their own words:

The Fund’s primary purpose is providing legal defense and endowment support for the largest nonprofit, investigative reporting institution in the world, the Center for Public Integrity

According to AP, that makes them two nonprofit journalism organizations, when in fact it’s one organization with a legal branch to shield it from lawsuits.

Ed Morrissey takes a look at who’s behind the Center for Public Integrity:

the Center for Public Integrity hardly qualifies as “independent”. It gets much of its funding from George Soros, who has thrown millions of dollars behind Democratic political candidates, and explicitly campaigned to defeat George Bush in 2004.
…
Nowhere in these articles do either news organization bother to inform their reader of the partisan nature of the CPI. Besides Soros, it gets financing from the Streisand Foundation, the Ford Foundation, and the Los Angeles Times Foundation. The FIJ shares most of its board members with the CPI, which hardly makes it a separate entity in terms of its political direction.

Big Lizards explains How to Lie About Lying:

One notes that “Charles Lewis and Mark Reading-Smith of the Fund for Independence in Journalism staff members” — isn’t that a lovely grammatical construct? — do not deny that Iraq was “trying to… obtain” WMD, even though they appear to include such claims under the category of “false statements.”

Nor do they deny the administration’s claim that Iraq had “links” with al-Qaeda. They merely dispute the meaningfulness of those links… and dub that another “false statement” by the president and his administration.

If you look at the Wikipedia entry on the Center for Public Integrity, you’ll find more on the sources of funds. By the way,

Mr Soros was the man reported to have made $1bn profit in September 1992, betting correctly that the British currency would have to be devalued and leave the European Exchange Rate Mechanism.

“I’m looking for a significant shift of power and influence away from the US in particular and a shift in favour of the developing world, particularly China.”

So, before you descend into further APDD (Associated Press Deficit Disorder), it’s worthwhile asking, “Who’s paying for the study?”, and take it from there.